The African Jesuit AIDS Network organised various events to celebrate the milestones made in the fight against the AIDS epidemic in Africa. This comes at a time when AJAN is celebrating its 20 years of working tirelessly to support the wide and diverse range of initiatives by Jesuits and their co-workers in 20 countries in the AIDS ministry.

In the Jesuit West Africa Province (AOC), youth converged at Centre d'Information d'Education et d'Ecoute du Centre Catholique Universitaire (CIEE-CCU), in Central African Republic (CAR) to commemorate the strides made towards the fight against AIDS in the country, to reflect on the international theme âPush for Equality'' and also the national theme to âEnd the Transmission of HIV/AIDS among Young Girls and Adolescents''. The President of the Central African Republic H.E Faustin-Archange TouadÃ©ra, attended the ceremony which was held at the LycÃ©e des Martyrs in Bangui, where he also launched the national strategic plan to fight HIV/AIDS by 2030. This strategic plan aims to eliminate discrimination and promote the push for equality as per the theme of this yearâs World AIDS day. The president urged young people in CAR not only to be aware of HIV/AIDS and the seriousness of it but also to pay attention to their own education as the country pushes towards a momentum of intellectual evolution of youth. CIEE-CCU has 154 Peer Educators who continue to raise awareness within CAR. The presence of students, organisations and associations advocating for an AIDS free generation at the LycÃ©e des Martyrs ceremony testifies to the importance that CAR as a country attaches to the fight against this scourge. The Peer Educators of CIEE-CCU consists of a large number of actors involved in the fight against HIV/AIDS in schools, who constantly find themselves challenged more than ever in their respective educational institutions to build AHAPPY generation with a sense of compassion and commitment. 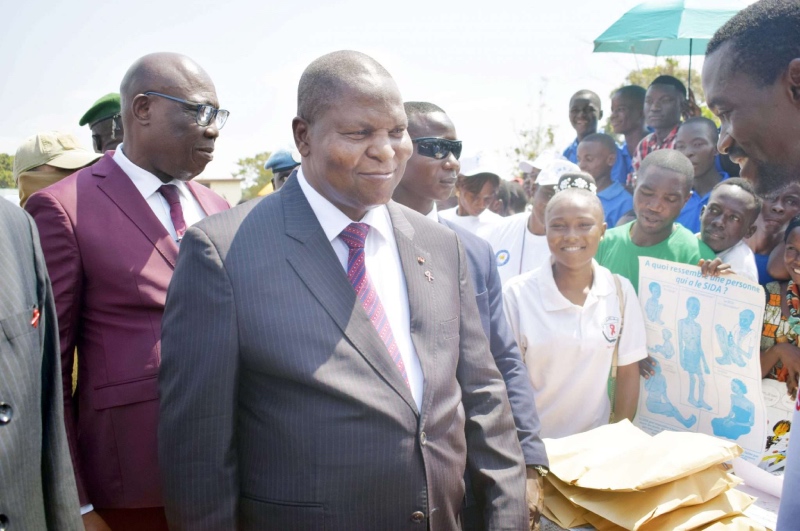 The President of the Central African Republic H.E Faustin-Archange TouadÃ©ra, interacting with the youth

In the Jesuit Madagascar Province (MDG), the World AIDS day was celebrated for three days, at the Analakely town hall Antananarivo downtown from 29 November 2022 to 01 December 2022. During the three days an exhibition by Centre Arrupe Madagascar was held in order to create an awareness on the mission of the Society of Jesusâs apostolate, the African Jesuit AIDS Network (AJAN), in the fight against HIV/AIDS. This mission which is to "empower individuals, families and communities, and to work towards an HIV- and AIDS-free society, and towards the fullness of life" is realised, through the education imparted by Centre Arrupeâs EVA (Education for Life and Love) programs and particularly the AJAN HIV and AIDS Prevention Programme for the Youth (AHAPPY), which pays close attention to the integral formation of the youth with the aim of engendering an HIV-free generation in Africa. 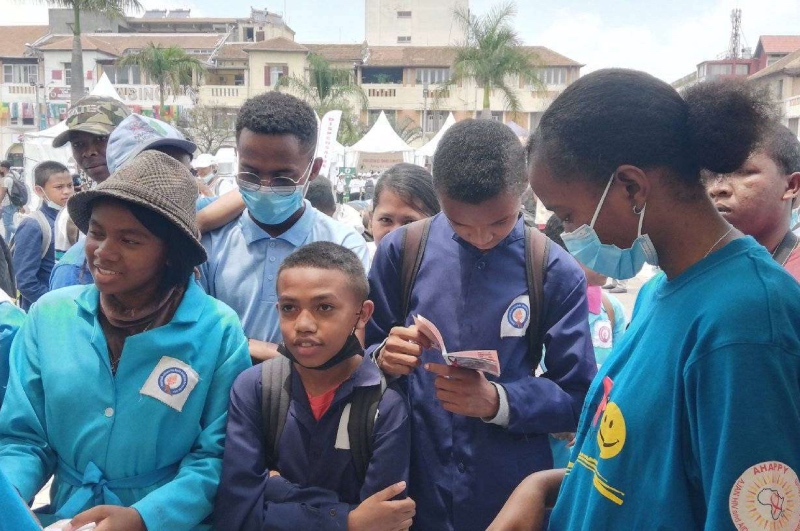 About 200 young people visited Centre Arrupeâs exhibition booth and were able to discuss this area of ââeducation that the Church promotes. The three days also presented an opportunity to meet and support people affected or infected with HIV, enabling the support of around 30 PLHIV according to their needs. There was also HIV screening and counseling. After two years of disruptions due to the coronavirus pandemic, this yearâs World AIDS Day event was an opportunity to resume awareness of the fight against AIDS and to awaken everyoneâs awareness of their commitment and responsibility to achieve the goal of an AIDS free world by 2030.

Coming closer home, AJAN held a prayer session at Africama House, the Jesuit Conference of Africa and Madagascar headquarters in Nairobi, Kenya, on 01 December 2022, bringing together Jesuits, and collaborators; a concrete testimony to our solidarity and shared responsibility in a âPush for Equalityâ.

AJAN celebrates 20th anniversary of service to the vulnerable

JCAM News By Jesuit Conference of Africa and Madagascar (JCAM)