The origins can be traced to certain developments in the 1970s that were made worse by adverse developments in the early 1980s. In the wake of the first oil price shock between 1972 and 1974, most of Africa's major primary exports experienced an international commodity boom, followed by a short bust. The governments of the affected countries generally responded to the price increases by sharply increasing public expenditures, complementing the revenue. Because of the decline in interest rates in wealthy nations following the financial crisis of 2008, borrowing costs had been cut to relatively low levels. African countries were able to borrow money at substantially lower interest rates as a result.

Debt levels across the region rose sharply over the past decade and were exacerbated during the Covid-19 pandemic as countries borrowed heavily to contain it. It is not just the failure to pay back what it owes that pushes the continent into the debt trap but the asymmetrical power difference between the donors and recipients of the funds. Notably, the debt payments have increased by 120% between 2010 and 2021. An increasing proportion of global south debt including African countries is owed to private creditors, who tend to charge much higher interest rates than other lenders. The creditors involved have mainly granted non-concessional loans and not concessional loans. It is worth noting that almost half of external debt and interest payments by low and lower-middle-income countries are to private lenders. Public debt has increased in 108 out of 116 global south countries. 54 countries are currently in a debt crisis. Several African countries including Sudan, Eritrea, Seychelles, Burundi, Kenya, Rwanda, and Ethiopia have exceeded the 60% debt-to-GDP threshold set by the African Monetary Co-operation (AMCP) for developing economies and the 55% debt-to-GDP ratio suggested by the International Monetary Fund (IMF) both in 2021 and 2022 as illustrated in Figure 1. Beyond this threshold, a country's economic stability is extremely precarious, and its government's capacity to sustain the economy in the event of a recession is compromised. After the cancellation of debts of developing countries in the early 2000s, a proliferation of new creditors emerged as African countries began entering capital markets.

According to a recent study by the British NGO Debt Justice published in 2022 titled "The Growing Debt Crisis in Lower Income Countries and Cuts in Public Spending," based on World Bank figures the average interest rate for loans made to African states by private creditors is 5%, compared to 2.7% for loans made to the continent by Chinese public and private lenders, 1.3% for multilateral institutions, and 1.4% for other public creditors. Further Debt Justice notes that 12% of African governments' external debt is owed to Chinese lenders compared with 35% owed to western private lenders. For example, as of July 2022, Kenyaâs proportion of debt owed to multilateral stood at 46 %, followed by bilateral (25 %), International Sovereign bonds (20 %), commercial banks (6 %), and Guaranteed debt ( 3 %). 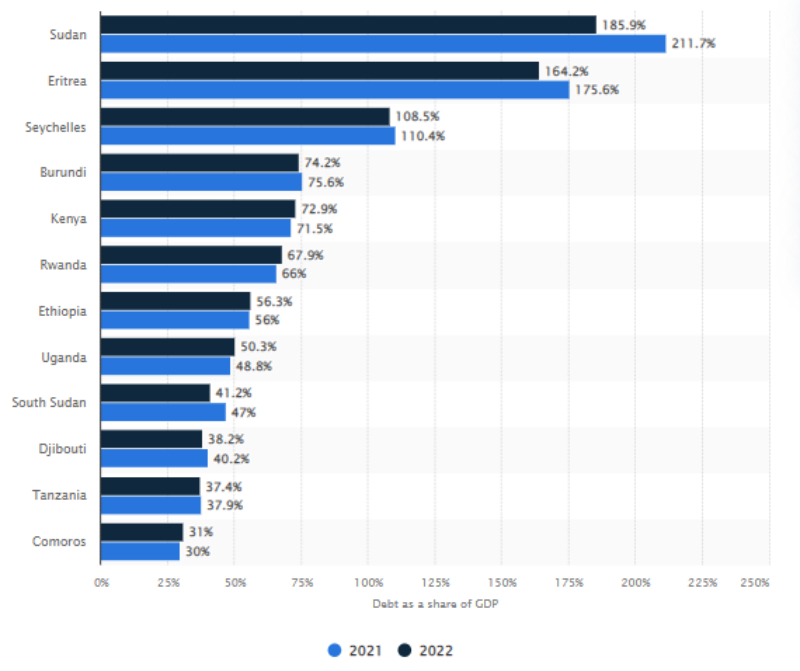 Figure 1: Government debt as a share of the Gross Domestic Product (GDP) in East Africa in 2021 and 2022, by country

Why the huge debt burden?

The regionâs current debt cycle has been fueled by infrastructure-led development regarded as a pathway for integrating the region into the global market. Infrastructure prominence is pushed by both international donors and recipients to impact economic growth even without keen consideration for an individual nation's status of infrastructure. Giving priority to economic infrastructure at the expense of structural transformation with a developmental approach perpetuates dependence on foreign finance. This debt-financed infrastructure boom competes with other key sectors such as agriculture critical for the growth and prosperity of the region. Even when Africa is struggling to clear its outstanding debts, it is dogged by diverse issues, including food crisis, climate change and variability demand quick attention, and social unrest and conflicts emanating from the deteriorating socioeconomic status of its people.

Investment in infrastructure has been given the pedestal and priority as a driver of Africaâs economic transformation, where international lending institutions, including the IMF and the World Bank, call for the need to boost infrastructure for strong and sustained growth. Crucial aspects of infrastructure such as access to clean water, adequate road density, proper sanitation, and adequate electricity generation and distribution are infrastructural indicators necessary for transforming the regionâs low socio-economic standards. Borrowing from external sources is well-founded in dependency theory which regards investments as a function of savings.

Africa resorts to external borrowing since the domestic savings are insufficient to fund its development projects. In contrast, debt as a means of fueling economic growth has been cast in doubt even when proper governance and accountability frameworks are put in place, debt may not yield the needed economic and developmental interest to spur economic growth and socioeconomic development. On the other hand, using Geographical Information System (GIS) and remote sensing technology to generate grid panel data on the effectiveness of foreign aid, it has been shown that China aid projects positively influence Africaâs economic growth, with economic infrastructure projects showing more positive correlation with Africaâs economic growth. Nonetheless, in focusing on infrastructure development for economic transformation, Africa is committing to the support and foreign aid from developmental partners to finance its projects consequently creating a debt burden and crisis in the region. The ensuing debt crisis, then, is a function of several factors, including macroeconomic shocks, unfavorable terms of trade, natural disasters, and poor institutional arrangements to guarantee proper debt management leading to delays in repayment.

It should be noted that the loans and grants advanced to the region comes with terms that impact the nation's internal capacity to compete at the global level. Some of the terms such as free trade policies and external tariff cuts deny local industries the capacity to favourably compete. In assessing how Sino-Kenyan infrastructural projects have impacted Kenyaâs external debt position, it was observed that the loans pose a risk of debt sustainability in the long term since they are tied and lack transparency. In Africa where most states have resorted to Chinese for loans, an unprecedented trend can be seen; traditionally, lending institutions such as the IMF and the World Bank have given conditional loans but China has in the recent past issued unconditional loans to the region. A major issue with unconditional loans is the lack of transparency; the lender is unbothered by governance and accountability structure in the borrowing nations. Further, lack of conditionality implies an absence of scrutiny of the borrowed loans, and coupled with high-level corruption in the region, much of the borrowed resources end up in private accounts. Ideally, the Chinese concessional loans through Chexim bank bear no difference from commercial lending from private lenders. Under this condition of debt distress, some countries find themselves in hard economic situations to fund other development programmes; the ensuing austerity measures affect efforts such as environmental conservation and social and welfare programmes.

The high foreign debts have aggravated social, political, economic, and environmental crises in almost every context, increasing inequality, facilitating continued inaction on climate change, and imperiling human rights in the region. High foreign debt prevents these nations from developing since the funds cannot be used for important investments like infrastructure or social spending because they must be used to pay interest and principal. Among the internal factors include poor debt management, low government income brought on by ineffective tax policy, and gaps in the rule of law. Furthermore, the loans are often used for the consumption of goods, rather than for productive investments. In addition, there are external shocks, such as falling commodity prices since 2011 or natural disasters like floods or storms. A high level of debt burden limits the regionâs capacity to address the prevailing global crises, including food crises and climate change. Structural problems, such as a poorly diversified economic and export structure, result in their economies being highly vulnerable to price and demand fluctuations on the world market. As a result, high debt levels, combined with the above-mentioned conditions, have contributed to slowing down government investment in infrastructure and human development, reversing years of progress and exposing structural economic and societal weaknesses.

In conclusion, several African countries are in or near debt distress. Thus, debt restructuring and debt relief should be an urgent priority. In order to prevent a renewed debt crisis in these countries, it is of primary importance to establish good debt management practices. A suitable debt structure that considers loan maturities and the ratios of domestic and foreign currency must be constructed, and the capacity for managing public debt must be strengthened. Additionally, effective debt management offers more accurate information and greater openness regarding the debt status in emerging nations. It is necessary to significantly expand and improve the positive debt management practices already put in place by lenders, such as the World Bank's Debt Management Facility, the International Monetary Fund, and UNCTAD's Debt Management and Financial Analysis System Programme. A uniform set of guidelines for responsible lending and borrowing is another crucial component. The United Nations, the G20, the OECD, and the Institute of International Finance have all made ideas thus far (a global association of private financial institutions). To prevent a wave of national debt crises, progress must be made toward orderly debt restructurings under the G20 common framework for the most afflicted. There is a need to revisit existing institutional mechanisms for debt resolution. The current global debt architecture is complex but grossly inadequate for troubled debt restructurings. The issue is fueled by the emergence of new creditors, including China and private creditors, which has led to an increasingly diffuse credit base characterized by limited transparency.