Despite ambitious goals, a business-as-usual approach to food systems has not made progress. Indeed, COVID-19 and climate change have disrupted food production and supply chains around the world, leading to a dramatic increase in the number of people experiencing moderate or severe food insecurity. According to the FAO, almost one in three people did not have access to adequate food in 2020 and the food security gender gap was increasing. In Africa, where food insecurity is most prevalent, 60% of people experienced moderate or severe food insecurity in the same year. It is not surprising, then, that civil society and corporate actors alike are calling for radical changes to the way food systems are governed. And yet these changes as currently proposed have some important blind spots, especially around aquatic foods.

The conversation around food systems governance is only just beginning to recognize the role played by aquatic foodsâmarine and inland capture fisheries, aquaculture, and maricultureâin providing protein and micronutrients to billions. Only two out of the 120 affiliated sessions at the UNFSS Pre-Summit mentioned aquatic foods in their titles. And this is despite the fact, according to the FAO, that fish account for about 17% of animal protein consumption globally. Furthermore, in many countries where malnutrition is prevalent, existing fisheries landings could already provide more than enough micronutrients for coastal populations. Clearly, something has gone wrong here. Why hasnât the food governance conversation extended to aquatic foods? And why are hunger and malnutrition on the rise when the production of aquatic foods has never been higher?

The Problem of Fisheries Extractivism

A partial answer to both of these questions has to do with the governance of capture fisheries. Fisheries are simply not governed with food security in mind. Rather, the law and policy devices used to control and âoptimizeâ fisheries production overwhelmingly reflect a management paradigm that attempts to maximize economic growth at the expense of legitimate ethical social objectives. This is fisheries extractivism, and it is at least partially responsible for the shared myopia of both food systems governance and fisheries management.

The extractivist model of fisheries governance primarily views marine living resources as potential drivers of economic growth. This modelâs goal is to extract marine resources at or close to their maximum sustainable yield (MSY), trade them as commodities, and optimize the economic efficiency of these processes. The macroeconomic growth this model pursues is either considered to be the best way to contribute to overall human well being or is considered to be a sufficient good in its own right. Either way, normative considerations are secondary if they enter the discussion at all.

A norms-based model, on the other hand, would foreground and prioritize ethical and legal norms as governing principles for fisheries. Examples of this model would include a sustainable livelihoods or human rights-based approach to fisheries management; the FAOâs Voluntary Guidelines for Securing Sustainable Small-Scale Fisheries in the Context of Food Security and Poverty Eradication (SSF Guidelines) could also be considered to follow the norms-based model. Under this model, marine living resources are utilized first to provide food and livelihoods for those who most need them. Economic growth is considered to be a means, not an end, and states take on legal obligations to manage their fisheries in ways designed to fulfill their ethical commitments. 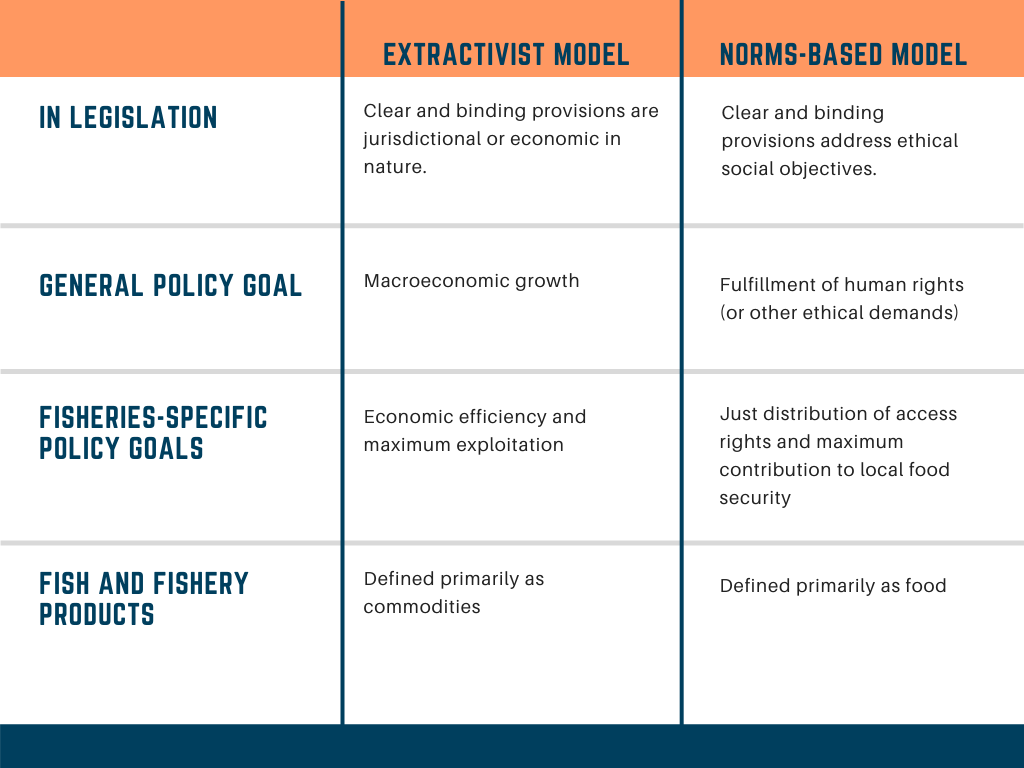 Sadly, the extractivist model is overwhelmingly the normal state of affairs in fisheries governance today. Take UNCLOS (the UN Convention on the Law of the Sea), for example. This foundational document for ocean governance also lays the foundations for fisheries extractivism. Throughout the treaty, provisions with clear and binding language are reserved for economic and jurisdictional concerns. Article 56, which provides the legal basis for statesâ exclusive economic zones (EEZs), and Article 62, on maximum exploitation of the total allowable catch (TAC), exemplify this type of provision. On the other hand, those parts of UNCLOS having to do with ethical concerns like food security are qualified by language that imposes no strong requirements. Consider Article 62, which provides states with instructions on how they are to allocate fishing rights to other nations. Here, a list of important ethical priorities appears, including âthe need to minimize social dislocationâ and âthe requirements of developing states.â Unfortunately, the only legal requirement in Article 62 is that states âconsiderâ these priorities. There is no requirement that fisheries be managed for food security.

This extractivist pattern is also dominant in national fisheries governance documents, where legislative and policymaking bodies often produce lists of objectives intended to guide fisheries management. Normally, these lists include both economic growth and food security, but do not confront tradeoffs between the two. As a result, governments are consistently failing to maximize the contribution of fisheries to local food security.

The global dominance of fisheries extractivism, and the corresponding failure to implement norms-based governance models, has directly undermined the food security of coastal peoples around the world. This situation is particularly problematic in Africa, where the proportion of people facing hunger in 2020 was more than double that in any other region. Fisheries extractivism reigns here as well. In South Africa, COVID-19 lockdowns prevented many artisanal fishers from practicing their trade and obtaining food for themselves and their communities. In Ghana, artisanal fishers make significant contributions to food and nutrition security, but their supply of fish is threatened by competition from industrial foreign fleets. Even the African Unionâs 2050 Integrated Maritime Strategy offers little more than lip service to food security while repeatedly emphasizing the importance of economic growth. These are not the right priorities. Africa and the world badly need an alternative to fisheries extractivism.

That alternative is blue justice. The term âblue justiceâ first made its way into the academic literature in Svein Jentoftâs 2019 book, Life Above Water. And while the term is still âin its infancy,â the concepts on which it draws are well established in social ethics. They also happen to be consistent with statesâ existing human rights commitments. A recent formulation highlights three components of blue justice: recognitional justice, procedural justice, and distributional justice, each of which is then used to identify specific marine policy recommendations. The most significant element of blue justice, however, is the demand that it be the primary lens for ocean governance. Rather than place ethical concerns like food security among a list of other goals with no clear priorities, blue justice contends that the wellbeing of people and communities ought to be at the center of any ocean governance process. This does not a priori exclude economic growth, but it puts economic growth in its place, making it a means to human development rather than an end in itself.

Current trends in the governance of both food systems and capture fisheries are failing to provide for those most in need. This is particularly true in Sub-Saharan Africa. Rectifying these egregious mistakes and maximizing aquatic foodsâ contributions to food and nutrition security will require that policymakers frame their initiatives in ethical, and not primarily economic, terms. We need blue justice, not fisheries extractivism.