Retelling the story of creation from a realism artist’s eye

On Friday June 11, 2021, at 2:00 pm (EAT) commissioned art pieces by the President of the Jesuit Conference of Africa and Madagascar (JCAM), Fr. Agbonkhianmeghe E. Orobator, SJ, were unveiled at the new Africama House, the Jesuit headquarters in Nairobi, Kenya.

Jesuits, collaborators, friends, and family of the artist graced the event to view the art pieces and to support the young artist. 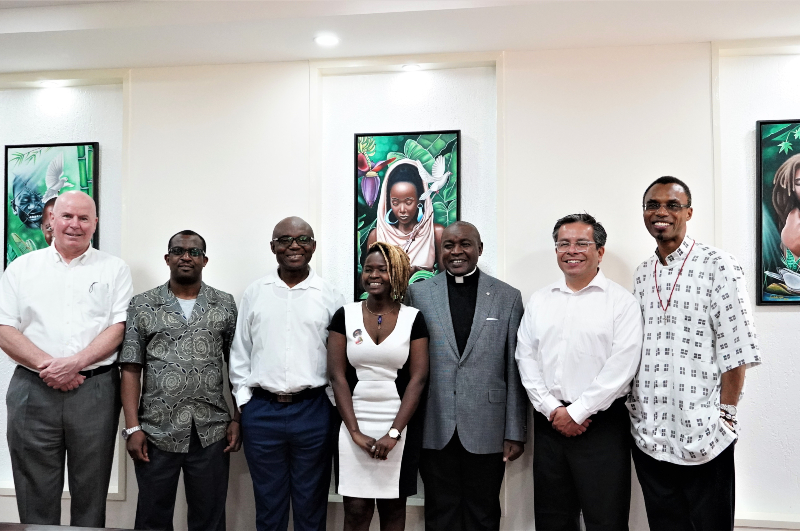 The commissioning of Fridah Ijaiâs work came after a feature story of her work on the Daily Nation, a local daily in Kenya.

The paintings unveiled on Friday 11th June 2021, are fruits of numerous sketches, edits, and a rigorous consultation process, between the artist, the JCAM President, and Jesuits at the St. Ignatius Community in Africama, a process which began in October 2020.

During the debut of the paintings inspired by the story of creation, the JCAM President Fr. Orobator, SJ, indicated that the collaboration with the young artist was an expression of the commitment of the Jesuits in working with the youth in fulfillment of the third Universal Apostolic Preferences of the Society of Jesus which is âJourneying with the Youthâ. Fr. Orobator highlighted evangelisation as the theme and inspiration behind the commissioned art pieces, saying that â We are Godâs work of artâ. He quoted St. Paulâs letter to the Ephesians 2:10 ââ¦We are God's handiwork, created in Christ Jesus to do good works, which God prepared in advance for us to do.â Therefore, âGod is the ultimate artist, he continued. 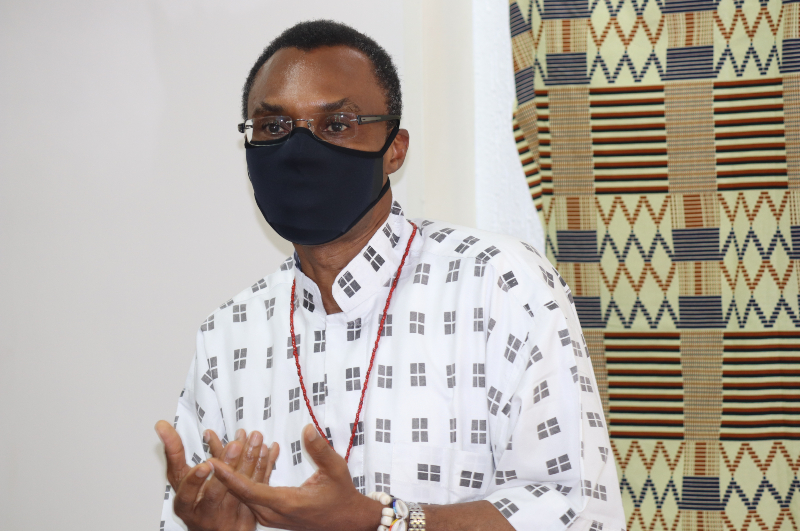 Contextualising art in the African Continent, he said, âGod is the Artist in Chief in many African Traditional Societies. âGod creates with patience and love and He invests Himself in what He is creating. Fr. Orobator called on all those present to be co-creators with God, to imitate Him, and present a vibrant world coloured with the grace of God.

At first glance, Fridahâs work incredibly captures details on canvas with a vibrancy of colour, representing her style as realism. Her interest in art goes back to her Primary School days, and she has honed her skills over the years. She is currently studying Bachelor of Arts in Fine Art, at the Kenyatta University, in Nairobi, Kenya.

The first paintingâs key feature is that of a smiling African Child. Often the representation of Africa is one of a continent that is poor, and deplorable in every sphere of life. Malnourished children are often at the center of this representation. As the Jesuit Conference of Africa and Madagascar continues to advocate for the rights of the child through its safeguarding and child protection initiatives, this painting indeed brings to life the African Child, depicting vibrancy through colour and beauty that corrects the deep-held beliefs of a hungry and suffering continent. 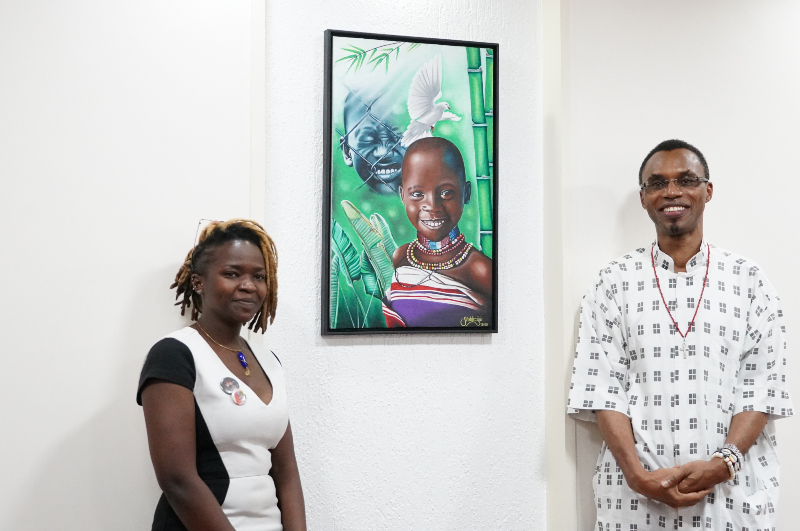 As Fridah explains, the painting showcases two African Children, separated by a wire mesh fence. One child wears an ear-to-ear smile, depicted in bold African colours, surrounded by nature in form of green vegetation, the other a black and white. So why the contrast? âI paint the child in white and black to represent what should be Africaâs past. There has always been the assumption that Africa is in pain and suffering. I have seen images of African children in dirty clothes, crying. This is our past. We want to portray Africa as a beautiful continent and happy continent,â Fridah says.

In the second painting, the key feature is a woman, who appears to be in a moment of Zen, one might say. She is surrounded by nature as well, she seems to be in a garden of sorts, amid the natural vegetation and birds. Her attention on the painting is directed to her palms, cradling tenderly in them what a cracked egg. What looks like a knotted rope at the beginning, then runs smoothly with a breaking point somewhere as it runs to the top through the shell, cutting through the entire piece of the painting from the right-hand side. A dove also appears perched at the end of the rope and appears very bright. This painting is dubbed âNew Eveâ. Fridah interprets these elements saying that: âThe cracked egg signifies the new beginning through the birth of Jesus Christ. The rope is also divided into two parts; the old and the new and where the rope breaks signify the beginning of new life that Mother Mary brings to the world. The woman is black and she is surrounded by green vegetation to signify the African continentâs richness. The banana in the photo is a common plant in Africa. I was trying to bring out Eve in an environment that we are all familiar with and at the same time be the garden of Eden, which I believe is Africa.â 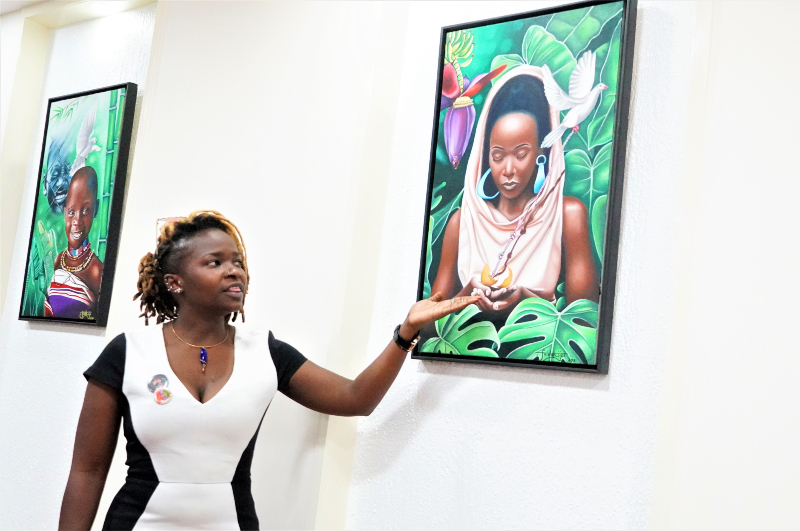 The last painting unveiled, dubbed "New Adamâ is also inspired by the creation story, When asked what inspired it, Fridah says, âmy idea was to create an African Adam in the garden of Eden (Africa) who in turn reincarnates as Jesus in the New Testament. In this painting, Iâve brought in the aspect of Jesus in the water since Jesus is the water of lifeâ. She indicates further that when she got to show this piece to two Jesuits one said it was John the Baptist and the dove was waiting for Jesus to come out of the water during his baptism? (interesting right) and another one said that he sees a Rastafarian religion/culture and the dreadlocks in this case are a symbol of the lion of Judah? According to Fridah, everyone has their own opinion, âI love when people can think through and enjoy my paintings? and thatâs when I decided to call it âWho Do You Think I Amâ.â 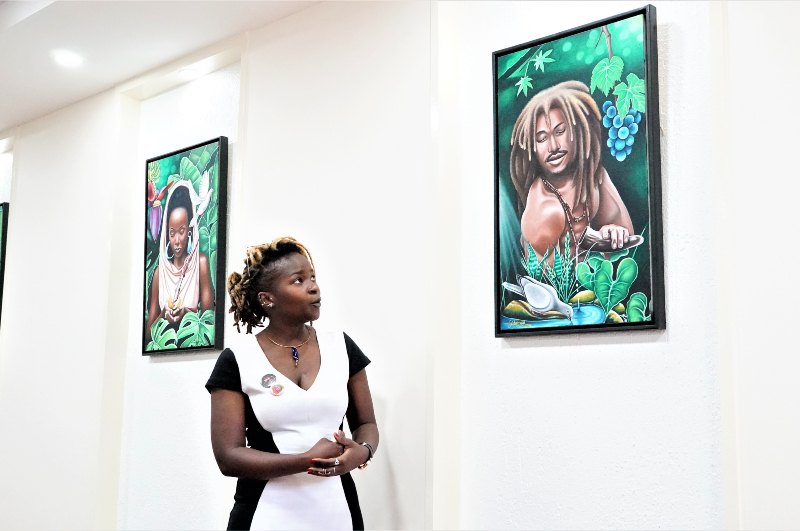 Fr. John the Baptist Anyeh-Zamcho, the Socius of JCAM, who was the MC of the day, saw âNew Adamâ as the hope for humanity following the fall of man, highlighting thatââ¦the old Adam did not have the capacity to pull humanity out of suffering but the new Adam, Jesus, has the power to save humanityâ. 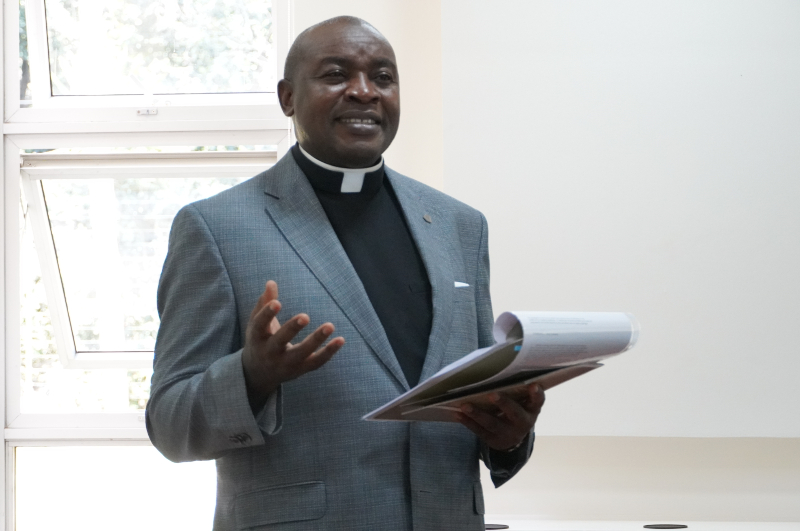 Frankly Speaking: Networking Around the Cross