Day Three of the Formation Assembly

The third day of the Formation Assembly begun with a prayer session, followed by a presentation by Fr Mike Lewis SJ, which was on renewing Identity, Mission and Profile of Jesuits in Formation and Formators.Â Like the second day, we received some interesting statistics in the form of maps showing us different realities of Africa now and in the future - African will remain unwealthy relative to other continents, war and violence was seen to be a major life experience which has impacted most of us and other faiths are gaining ground relative to Christianity and Catholicism in particular. This is the global context which our formation is invited to take into consideration.

Mike gave us the three hooks of money, sex and power, to which the answers of simplicity, fidelity and service were suggested. These came up specifically in some group responses later on as being important aspects to keep in mind for formation. He also mentioned fear, anger and passive aggression as being enemies of formation.

When considering formation, the numbers are not going up as much as perhaps we thought: in recent history, we have only been increasing by 9 / 10 men in formation every year, taking into account men who are leaving and mortality rates. War and economics were mentioned as important historical factors influencing vocations.

Mike emphasised that there is no stereotype of a typical African Jesuit: we are so diverse as a group. This supports what we have said earlier in the week about formation not being about fitting a person into a Jesuit mould - we need a personalised and contextualised model of formation.

This model again became clear when Mike discussed sexuality: we have to be aware in formation of the diversity of the sexualities which are prevalent in our groups.

He emphasised that there are different needs at different levels of formation: needs pertaining to novitiate, philosophy, regency, theology etc.

In a contextualised model, we should not focus exclusively on academic formation, paying attention also to emotional and psychological needs.

In this regard, Mike urged us to use professional and psychological input where necessary, both for formators and for men in formation. We should not be hesitant to do this.

Perhaps also linked to this theme of personalised formation, men in formation are afraid of being dismissed if they do not fit into the Jesuit mould. So, they are afraid of talking of particular problems they might have. Through pursuing a personalised model of formation which responds to each person's needs, formators would be encouraging an environment of transparency. Connected to this is the teaching opportunity which presents itself to formators when men in formation make mistakes. He mentioned that, considering documents, we have too many of them to consider in the society and this broadens when we talk about the Church more widely. He suggested that we implement and appropriate the documents we have. This point came out in the reflections in groups about Jesuit identity: When appropriating Jesuit identity, documents like the Constitutions and important GC documents can help men in formation find the core of their identities.Â Ultimately, formators needs to have depth, creativity, and imagination in the face of the mega trends in Church.

The second presentation of the day was by Dr David Kaulem. 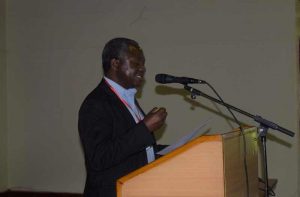 David Munene, one of the lay participants makes his presentation to the Formation Assembly 2019 delegates

David's talk, addressed a major trend in our economic approach: He described our prevalent and individualistic neo-liberal economic model: The individualism which this promotes is like the air we breathe, and we must be aware of this when considering our men in formation.

This emphasised that we need to be aware of processes that our formation is competing with. The men in formation are not a blank slate when they arrive on our doorsteps. They have been pre-formed by the dominant philosophies of the day, their own past experiences - in particular their experience in family.

The realities of this-preformation was an important aspect of some group input later on. David emphasised that successful formation needs to take this into account: again, we see a personalised formation model being advocated. What do we do with the virtues and talents, histories and experiences of the men in formation?

In the face of the dominant and individualistic economic model being proposed today, David proposed that we ask ourselves an important question: Who do we want to be as Jesuits? How do we want to respond to this dominant philosophy?

David suggested that this individualistic model, seen in our economic approach, may have an important impact in the way Jesuits work:

Moving on to our group input, the following themes were prominent: 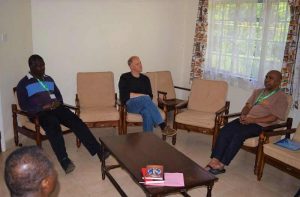 Group session during the third day of the Formation Assembly

“No human condition should be alien to the service of God’s people” – Rt. Rev. Rodrigo Mejia Saldarriaga

JRS Nigeria responding to the needs of displaced people

#EndSARS Protest: A Demand for Justice and Transformation

African Child: Promoting a Consistent Culture of Protection, Care and Safeguarding in Church and Society

Featured By Caleb Mwamisi, for AJAN

âAJAN must keep the spotlight on HIV and AIDSâ, says the President of JCAM ahead of AJAN assembly