The ceremony marking the end of this academic year was honored by the presence of Mgr Pierre Claver Yesso, Vicar General of the Diocese of Abidjan for Religious Congregations. In addition to the authorities and students of ITCJ, several superiors of religious communities and other guests attended the ceremony. Three moments marked the day: presentation of the Laureates and delivery of certificates of completion to final year students; the Magis Award to the best professor; thanksgiving mass and agape.

Opening the ceremony, in his words of welcome, Fr. Jocelyn Rabeson, SJ, Rector and representative of Fr. Agbonkhianmeghe E. Orobator, SJ, the President of the Board of Directors of ITCJ, expressed his thanksgiving to the Lord for all that happened this year under his benevolent gaze. At the same time, he addressed his thanks to all the people who contributed to the success of this academic year. 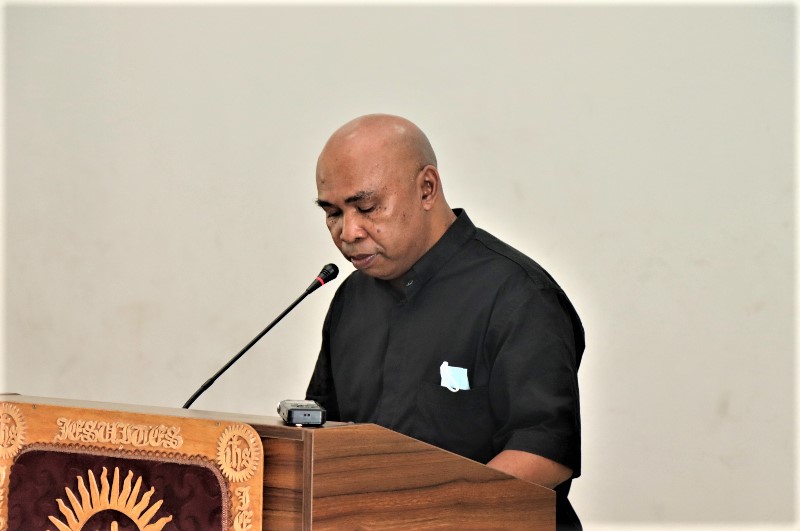 The Rector did not fail to extend his congratulations and encouragement to the final year students for their various future missions. 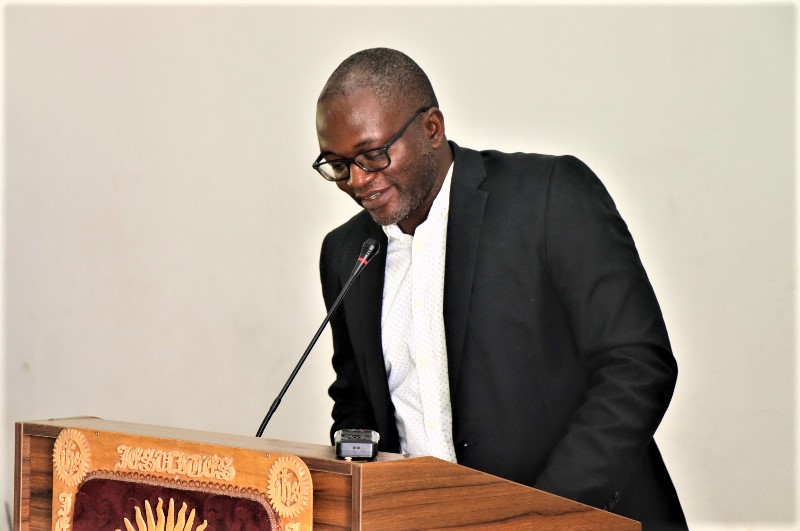 In his presentation, the academic secretary stressed that the year 2020-2021 was disrupted by two significant events: the presidential elections in CÃ´te-d'Ivoire and the Covid-19 health crisis. These two events forced the ITCJ authorities to twice suspend in-class lectures for online classes. The difficulties notwithstanding, the academic program for the year was not been delayed and the results of the students are, on the whole, very satisfactory. No cases of plagiarism were recorded in the work of the students. It was therefore to the ovations of the whole assembly that the Laureates were then presented and received their certificates of achievement and promotional scarves. Regarding the Masters Graduates, this was the very first batch of Masters in Bible and African Theological Studies at ITCJ.

In his speech, after the presentation of the certificates to the laureates, Fr Jean Messingue, SJ, Director of ITCJ, placed particular emphasis on the celebration of the first batch of Masters in Bible and African Theological Studies. He addressed his warm thanks and gratitude to Dr. Bienvenue Mayemba, SJ, Promoter, and Director of this program, who spared no effort for this success. Moreover, for the Director of ITCJ, the laureates of the two cycles (undergraduate and Masters), were a promotion of resilience because marked by two years of health crisis (coronavirus) and many other difficulties. So, he urged them to put this resilience at the service of their next respective missions: the world to which they are sent needs resilient pastors. 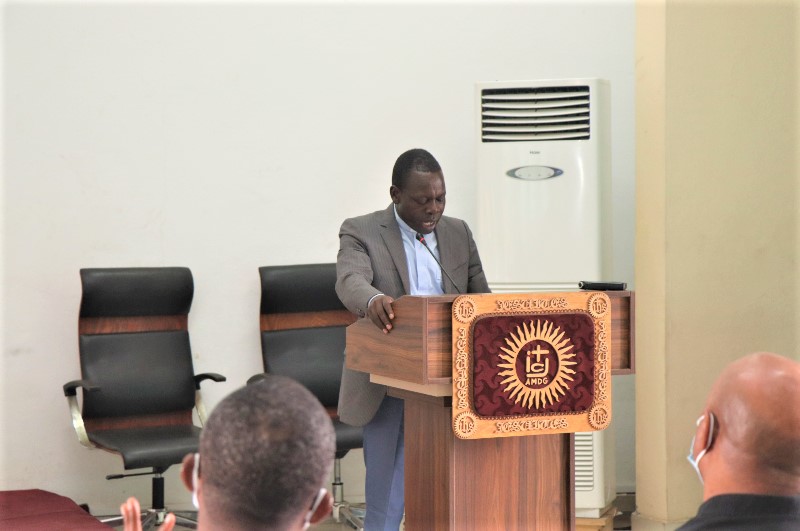 In addition, the Director of ITCJ announced some perspectives and events for the next academic year: a bachelor's degree program in applied theology is opening up for pastoral workers and especially lay people; the closing of the âemeritatâ of Fr. Michel Istas, SJ next September; the Ignatian year and the Synod on the Church. Regarding the Synod on the Church, Fr. Jean Missegue, addressing his Eminence Jean-Pierre Cardinal Kutwa through the Vicar General who represented him, expressed the desire and availability of ITCJ to be involved in the process of investigation and data collection proposed by Pope Francis. 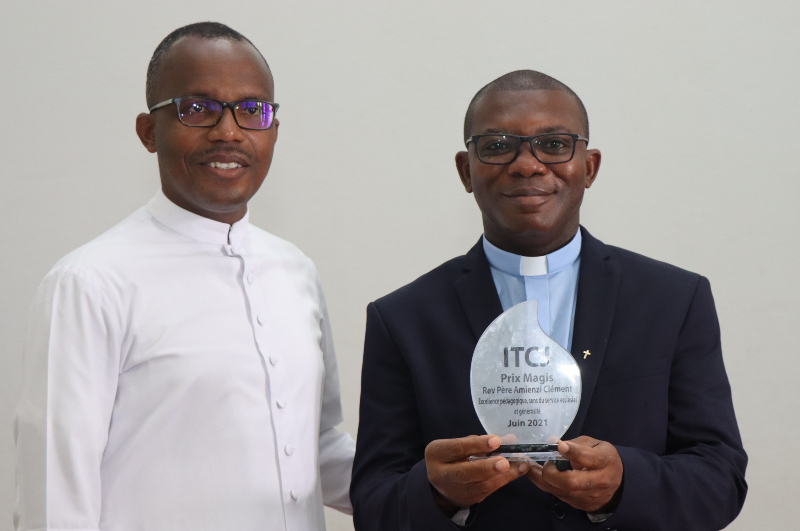 The presentation of the Magis Award by Mgr Pierre-Claver Yesso to prof. Alain ClÃ©ment Amiezi was immediately followed by a speech of from Prof. Fr. Basile Djro Djro, appointed Godfather and sponsor of the final year promotion. In his speech, Fr. Djro Djro reminded the laureates of the challenges of the context of globalization that is ours. He invited them to learn to be globalists differently and to apply the dialectic of theory and practice in order to be able to best respond to the challenges of pastoral care today. On behalf of the final year class, AngÃ¨le Kakou thanked various authorities of ITCJ as well as the undergraduate students and superiors from different communities present at the ceremony.

The second part of the ceremony was marked by a thanksgiving Mass. This was presided by Mgr Pierre-Claver. It was towards the end of the Mass that the Rector of ITCJ, on behalf of the President of the Board of Directors of ITCJ, Fr. Agbonkhianmeghe E. Orobator, SJ, declared the academic year 2020-2021 closed. 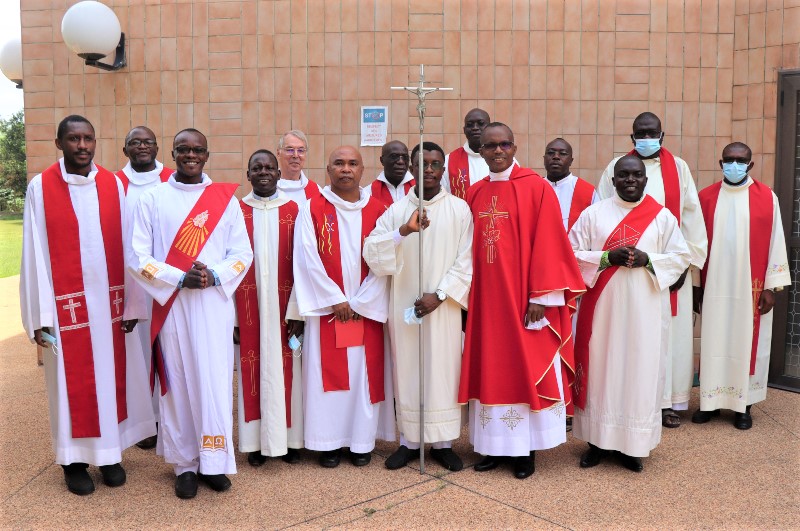